As an example, let's take a look at the rubric Generalities; Food and drinks; apples; desires: 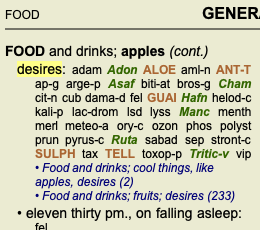 If you want to know more about a remedy in a rubric, the easiest way is to move the mouse over the remedy name, and look at the message area at the lower left bottom of the window.
If the mouse is moved over ant-t, the message shows:

You now know not only that Antimonium is in the third grade (by the way it is printed), but also that its complete name is Antimonium tartaricum, and that it is in this rubric because the four mentioned authors have contributed this information.

To get more information, double click on ant-t.
This will bring up the Remedy Information window: 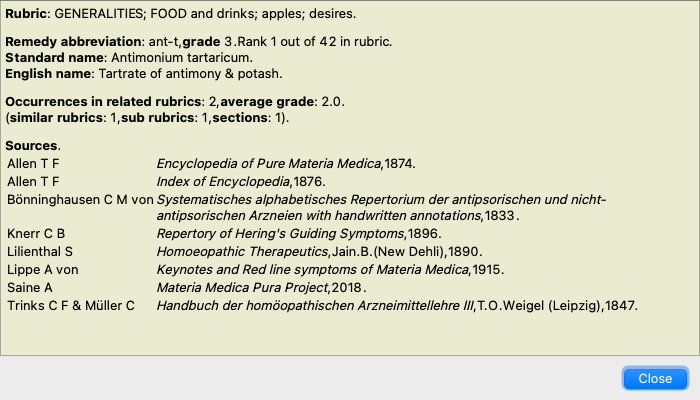 Related rubrics are rubrics that have some kind of relationship with the rubric you are viewing for this remedy.
In this example, these rubrics are:
Generalities; Food and drinks; cool things, like apples, desires
Generalities; Food and drinks; apples, desires; water, with desire for cold
Both of these rubrics also contain ant-t.
The higher the number of occurrences in related rubrics, and the higher the average weight in these rubrics, the more importance can be assigned to the remedy.

Similar Rubrics represents the occurrence of the remedy in rubrics with similar, but more specific, information as the rubric in question. Very specific rubrics mostly, if not always, have a Similar Rubric count of 0, but the more general the rubric in question, the higher the number can be. Generally, a higher Similar Rubric count in rubrics means that the remedy in question becomes more generally important, since there is more confirmation of this remedy found in corresponding rubrics elsewhere in the repertory.

For this example, the similar rubric is Generalities; Food and drinks; cool things, like apples, desires, which also contains ant-t (author Allen).

Not different from Similar Rubrics, except that the related rubrics are found in the sub rubrics of the rubric in question.
Generally, a higher Sub Rubric count means that the remedy originates from more sources, and can thus be considered more important.
For this example, the sub rubric is water, with desire for cold.

Note: in the above-mentioned rubric fruits; desires the sub rubric frequency for ant-t is 3.

Related rubrics can be anywhere in the repertory. If the related rubrics are in more different sections (chapters), the remedy can be considered more important.

Lists all the sources the remedy originates from. This includes at least the author name, the book or magazine title, and the year of publication.

If you have previously been working with MacRepertory, you might be accustomed to using author numbers instead of author names.
In the preferences settings, you can activate the option Author numbers. See the section Preferences for details.

The remedy information window will then show the author numbers as well: 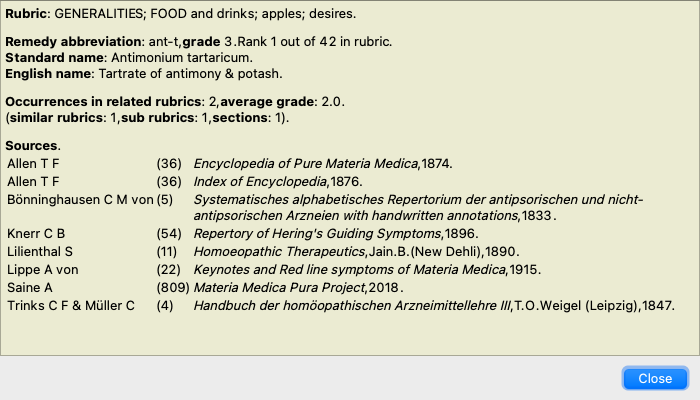